It's important that local people see the benefits of trees in all possible ways, and this can include produce. So Cllr Smith is keen to plant spaghetti trees between the posts all the way round the North Road Labyrinth.

For more details on how to harvest spaghetti, please see: https://www.youtube.com/watch?v=tVo_wkxH9dU
Posted by Unknown at 11:16 No comments:

Everyone’s probably familiar with the concept of tactical voting. Under the First Past the Post system, supporters of parties which are smaller in the constituency often vote for one of the more major candidates. For instance, some greens will lend their vote to Plaid Cymru and so on.

The electoral system for the Welsh Assembly, with two votes – one for the constituency and one for the region – provides a chance to understand which groups vote tactically, and for whom.

This suggests several things. The most obvious is that the libdems lost over a third of their support on the regional list, and given how many people had voted for the LibDems,  this meant over 3000 votes.

Another clear finding is that lots of Labour, Tory and Green supporters voted tactically in the constituency. The three parties each added around 50% extra to their vote at the regional list.

One of the very interesting things is how stable Plaid Cymru’s vote was. This is surprising to an extent, since Elin is very popular in the area, and many people on the doorstep were very supportive of her. But it looks like the local candidate is a “shop-font” for her party in general – Plaid Cymru supporters vote for Elin in the constituency and then vote for her party in the Region.

I won’t deny that Elizabeth Evans of the libdems also has a lot of supporters in Ceredigion. But if they support her, the libdem vote would be expected to be stable on the regional list also.

The only possible conclusion is that the libdem vote in Ceredigion is a coalition vote – a tactical vote against Plaid Cymru. Many Conservative and Labour supporters, and some UKIP supporters also, vote for the libdems in an attempt to stop Plaid Cymru from winning the seat. Alun Williams wrote about this phenomenon some time ago: http://bronglais.blogspot.co.uk/2010/05/ceredigion-8000-why.html

This also reflects the very negative campaign that the LibDems have run in Ceredigion this year, where several LibDem leaflets appeared to focus more on opposition to Plaid Cymru than on promoting their own party. Clearly the bar charts which show that the election is a two-horse race have had an effect.

Very fortunately, Plaid Cymru ran a very postive campaing in Ceredigion this year, and the result is clear. Elin Jones has increased her majority, and the attempt to build a coalition against Plaid Cymru has been a failure. Imagine for a moment: how different would Ceredigion politics be if everyone voted for their favourite political party?
Posted by Unknown at 16:08 No comments:

Following the discussions about the referendum on EU membership in Fill Council on Tuesday night,
I can declare that I have found a manuscript in the National Library which allows Aberystwyth to have its own foreign policy, including international treaties. This is very exciting for the town, both in terms of its history and its future.

In the next Council meeting, I will be putting a motion for Aberystywth to declare its independence of the UK if there is a vote to leave the EU. This follows findings that Ceredigion, and in particular Aberystwyth, is the most supportive place in favour of the EU in the whole of the UK.

I am also in favour of us joining the Schengen agreement, which allows freedom of movement around the EU without requiring a passport. Although a passport would be needed to go outside Aberystwyth under this system, we can resurrect the old toll-gates: Southgate, Northgate and so on; checking passports will provide employment. Wetherspoons will turn into a Customs office for people arriving by train.

It could be asked how people in Aberystwyth can travel freely to the Continent if they have to go via UK? But I have exciting plans for this...

How about zip-wires from the top of Constitution Hill to Brittany, Ireland, Isle of Mann, Scotland and Cornwall? Ideas of this kind have won a lot of support in the town. If we raise the precept enough, maybe we can build one to the Basque Country also.

Also, we have a great rowing club in Aberystwyth, who row to Ireland regularly as part of the Celtic Challenge. My fellow town councillor Steve Davies and his friends have offered to give lifts to people across the Irish Sea – very kind!

This is an exciting period. In the long term, I would like to see Abersytwyth follow in the footsteps of Llanrwst by applying for UN membership.
Posted by Unknown at 12:10 No comments:

This week, a plaque was installed on Pont Trefechan to commemorate Cymdeithas yr Iaith Gymraeg (Welsh Lanuage Society)’s first major protest in 1963. As a Councillor, I took the matter to the Aberystwyth Town Council, arranged the plaque and I’m very pleased that the plaque is now on the bridge. 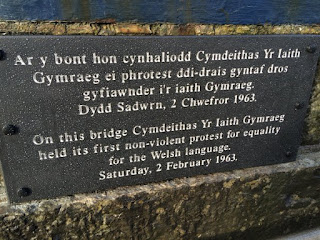 History of the Protest

The first protests in 1963 were a turning point in the history of the Welsh language, and also a turning point in Welsh history. After holding a protest to try to get leaflets and so on in Welsh in Aberystwyth Post Office, tens of people blocked the traffic on the bridge, earning national attention. 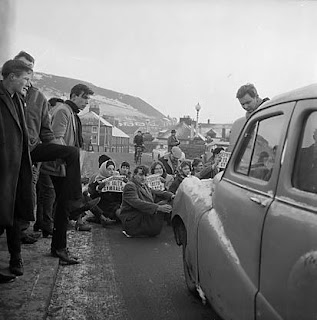 Since then, the bridge has come to symbolise the struggle for rights for Welsh speakers, a struggle which has borne fruit in several areas such as road signs, radio, TV, Welsh language services and leaflets from public bodies, Welsh medium education and so on (although there are still many things yet to be won!)

Because of this, the bridge has become a national icon and many attempts have been made to remember the original protest. For instance a large number of people recreated the protest twice in 2013, once as a genuine protest and once as part of the street drama Y Bont. 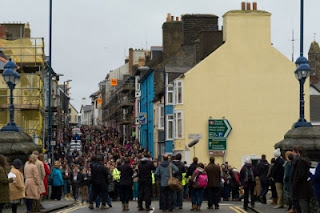 The first plaque was installed on the bridge by Cymdeithas yr Iaith Gymraeg in the 1980s, but it came down – it is not known exactly how but many fear that hatred was behind this. The second plaque was placed by Aberystwyth Town Council in 2004.

Unfortunately, I was made aware on the night of 31 August 2015 that the plaque had come down from the bridge wall and had smashed on the ground. A member of the public had already informed the Police, and I went to see the site at around midnight 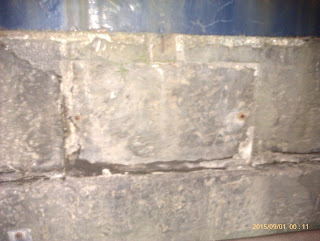 The next day, I had to collect the plaque from the Police Station in a suitcase!! The Police said that they were of the view that it was accidental, that the screws had rusted through, the plaque had fallen, someone had tried to glue the plac back into place and it had fallen again and smashed. Unfortunately, I came to the conclusion that it couldn’t be fixed. 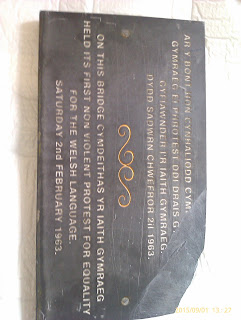 I put a motion to the Council for us to buy a new plaque of the same type and hold an unveiling event. I said that the plaque would need to have 6 screws, of a material that would not rust, rather than 2, in order to ensure that the plaque would stay in place. The motion was passed: Hooray!! After ordering the plaque, I had a site meeting on Friday with Paul James of James Memorials, Llandre and by Wednesday the plaque was up!!

I feel that this has added a lot to the town. Plaques are a great focus for remembering and for informing people about how much history there is in the town. They are also very good for visitors and tourists, and they look very smart. It’s very appropriate to note something so crucial and important that happened here in Aberystwyth
Posted by Unknown at 14:14 No comments: